When are the NBA Social Media Awards?

The hosts of this premier event will be the legendary Rick Fox, Shaquille O’neal and Lang Whitaker. This will be the first time any major American sport league will dedicate an entire award ceremony to Social Media. It will be an event to remember!

What is the NBA Social Media Award?

This award will be a prestigious award, but with its new birth the prestige has yet to fester. The NBA Social Media Award will focus on the best moments in the 2011-2012 season that created a social media buzz. Was it the epic LeBron Dunks that had people posting the next day? Was it the tragic tear of Derrick Rose’s ACL in the first game of the series? Or is it those buzzer beaters that amp the crowd?

With any awards show, there are categories. Some of the NBA Social Media Award categories will be:

The BIG – Best In the Game Award

The LOL – Laugh Out Loud Award

This award may not be welcomed by the NBA player, but it has given great entertainment to their fans. More specifically, the NBA player with the most shared or liked blooper video is the recipient of the LOL Award.

Most epic of all, the reason the crowd stands on their feet, the dunk. Nothing silences an opposing crowd when they are on that devastating 17-0 run in the last 5 minutes like an authoritative dunk screaming, “I’m not done with this game”. The Social Slam award will be given to the dunk (during regular season) that is like or shared the most.

This is a team award which is given to the team with the greatest (percentage) improvement over the season. This percentage improvement is measured across every basketball statistic such as shooting percentage, assists, offensive boards, defensive boards, steals, interruptions and free throws.

How can I vote for NBA Social Media Awards?

Fans are able to vote from June 6th to June18th. Vote Here.

Why is this recognizing Social Media Interactions a big deal? 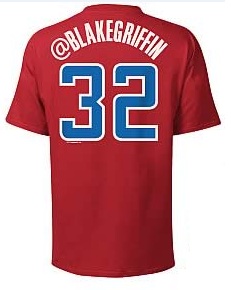 Recognizing social media is big deal, because social media is a big deal. The influence that the NBA has had with social media has been outstanding, they are the first American sports league that has attained a twitter following of 5 million. NBA is also achieving great things on Facebook with more than 13 million likes on their fan page. Not to mention, being involved in social media has become so popular, that fans are buying clothes with their favorite NBA players twitter handles.
Sitting in the crowd staring at the @BLAKEGRIFFIN throughout the game, the likelihood that you will pull out that smart phone and add another twitter is very high. As it should be, who doesn’t want to know what Blake Griffin is up to next?
The point being, Social Media has become an asset to every business. Having an awards for Social Media is finally giving it the respect it deserves. Don’t forget that the greatest thing about Social Media is that you are the ones casting your votes, you share that epic dunk, you like the YouTube with the jaw-dropping buzzer beater and you tweet about your every opinion.
Get your business involved in Social Media. See results, grow in your customer base and become viral. If you need help with your Social Media Contact Us now, or call us at 303.473.4400