Businesses and users alike are feeling more deceived by Facebook. First, they were suggested to buy Facebook likes for long-term investment. It turns out many of the likes came from Click Farms that paid $1 per 1000 likes and your likes would come from out of country such as from India, Egypt, and the Philippines. At first it seems cool that your business page is getting international attention, until you realize these are fake accounts or people just out to make a buck.

Back in August 2012, Facebook did delete 83 million fake accounts but that didn’t prevent more from popping up since then. The problem is, people incorrectly associated all likes as a plus but what they should focus on are engagement. The likes could very likely not be relevant to your target at all.

Likes Do Not Correlate to Engagement

One would assume that the more likes you have, the higher rate of engagement your posts would have. A great example of how this is not the case is when the US State Department paid Facebook $630,000 to get 2 million followers, only to receive a 2% engagement rate. Granted, 120,000 people engaging with your page per week is a cool number, 2% is not.

Social engagement is critical for many businesses marketing themselves and cultivating their brands. When Facebook’s algorithms filter out those posts, people start forgetting about the brand. Seeing as how the point of Facebook as a social media platform is to get people to interact with each other and Facebook dropped the reach of business pages to users, it’s easy to see why businesses are angry. 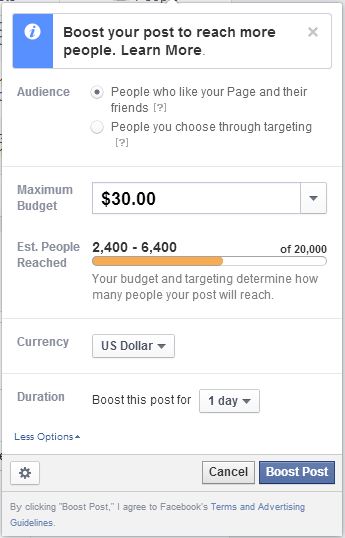 Facebook’s solution to this problem is getting people to pay for ads and to “boost posts” so that their followers will actually see it and promises of exponentially reaching much more audiences.

Here, we have a circle of despair where Facebook encourages businesses to buy likes, then their algorithm decreases post reach, then in addition to paying for likes, you have to pay to show your posts to those who liked your page.

How deep do Facebook’s pockets go?

From a social media platform to an ad platform (with some social), Facebook has changed its roots since the beginning. You can make sure you’re getting the posts from businesses you follow by clicking “Liked” then “Get Notification.”

In defense of the current algorithm, the staggering number of posts each day cannot be seen by everybody and thus are filtered down to what seems most interesting.

This is based on who sees it and whether or not they like or comment on that post or share it with others. Yes, it makes sense to then filter to what is most relevant but no, it doesn’t make sense to trick people into buying ads.

If you aren’t yet convinced that Facebook is becoming an ad platform, you haven’t paid attention to the ads that sneak their way into your News Feed. On May 23rd, Facebook opened up restaurant pages to posting their menus on their pages so expect to start seeing those soon. Here’s another reason that Facebook is now an ad medium: Video Ads are on their way.

In March, Facebook announced that they started testing video ads and they will soon roll out over the next several months. As some of you may have noticed, any videos in your News Feed starts to play automatically without you clicking “play.” These 15-second video ads will also start playing without sound.

Granted, the trend of TV commercials have been moving online with YouTube, Hulu, and those annoying video ads on sites that have you freaking out which tab it’s coming from, so Facebook is merely tapping into the profits. On Facebook though, everybody is viewed as an advertiser. View, click, share.