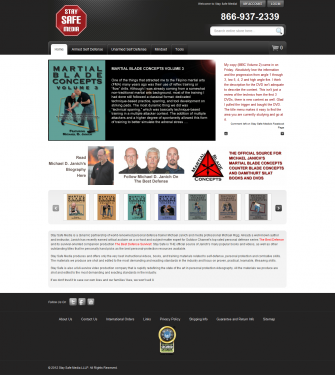 StaySafeMedia.com is an eCommerce site that sells personal defense courses in a variety of formats such as videos and books. The original eCommerce site had been run by a custom PHP platform which had become outdated. The client needed a secure platform for their eCommerce store and was also interested in new functionality which they had seen on other sites.  They needed to add videos, update the design and be able to connect with their customers on social media.

The original platform was both less secure then Magento and  provided little of the functionality which most eCommerce sites now depend on. After taking a look at the existing functionality we had a good idea about what types of platforms would work best for them. We suggested Magento Community as the new platform for Stay Safe Media for a couple reasons –

First, Magento would give them the ability to better manage their customer base, run reports, make promotional rules and codes, and would vastly simplify the usability of the site.

Second, Magento is a very secure platform for eCommerce and came with all the necessary security features that Stay Safe Media was interested in such as CAPTCHA validation.

Finally, Magento gave the client all their existing frontend functionality from their previous site while giving them new features for their customers. This included a Customer Account dashboard, “Shop By” refinements for categories, clear out of stock notices, up-sell options for product pages and improved shopping cart functionality.

After going with Magento for the eCommerce platform we took a look at what we could do to improve on the current site. Rather then using the existing design on Stay Safe Media we decided to upgrade them to a new design. We also made improvements to their logo and updated the homepage to include sliders, testimonials and product carousel. Finally we included the content from the original site at the bottom of the homepage to improve SEO.

To migrate them from their previous platform we needed to import both Products and Customers into Magento. We did this by dumping their previous MySQL database and running a script to transfer everything into Magento. The customer import was done just before taking the site live to ensure that all customers were imported.

We also helped them a couple of additional items that are always critical to moving a site. This included re-keying their SSL Certificate for the new server, helping them point over the domain and setting up existing email accounts on their new server.

The new site looks and works great, you can check it out yourself here at staysafemedia.com.