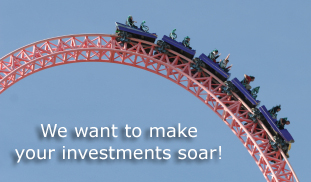 One of my all time favorite marketing blunders was very subtle. It was for a financial services company who wanted “to make your investments soar.” They created an oversized postcard that had a picture of two business people riding on a rollercoaster. Both people were smiling and happy, and had their hands in the air. But the roller coaster was going down. While the text was telling people that the company would make their money grow, the image showed two people rapidly descending. In light of all of the recent chaos on Wall Street, the last thing you want people to think of is that the value of their portfolio is in freefall.

Perhaps an image of two business people climbing to the top of a steep staircase might have created a more compelling message. Solid stone steps aren’t likely to move. And there is only one clear direction to go — up. My guess is that the campaign was implemented by a left-brain dominant person. Someone for whom the logical left side of the brain (text, math, logic) dominated their decision. The issue is that the right brain also comes into play when trying to decode the message, too. And if both sides don’t add up, there’s a disconnect. Marketing works best when it applies to both sides of the brain. Your campaign will have much greater impact when the images that tug on the emotional side reinforce what the logical left side of the brain is reading in large text at the top of a postcard.